The RSAF receives thousands of applications for the role of a Military Pilot every year, but only a few hundred makes it through the selection and interview. Once selected, the RSAF Pilot Trainee is put through rigorous training where at least 50% will drop out without their wings.

Nevertheless, an RSAF Pilot is exceptionally well paid. In a short career spanning all the way till 45 years old, the RSAF Pilot receives at least $5,609,196.80 in lifetime earnings. A financially savvy RSAF Pilot should be expected to be financially free at 45 years old.

This is how a short career as an RSAF Pilot looks like.

The RSAF Pilot Trainee’s career begins at the Flight Training Institute. Training done in phases, starting with Air Grading, Basic Wing Course, followed by either Fighter Wing Course, Rotary Wing Course or Transport Wing Course. Every one of these phases is notoriously demanding, and it is reasonable to expect 50% of the selected Pilot Trainees to drop out without their wings. For more details on training, read this article. 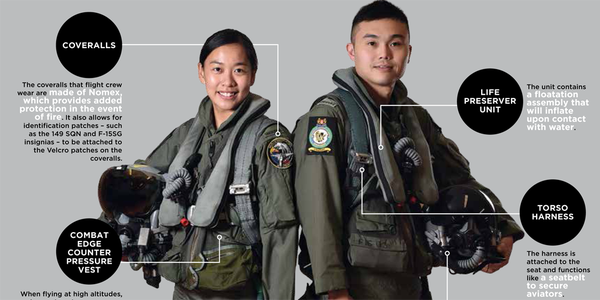 Upon getting their wings, an RSAF Pilot will be posted to an operational squadron where they will learn how to fly the Squadron’s aircraft. Life in Squadron is hard work. Depending on the Squadron, an RSAF Pilot can be expected to work more than 80 hours per week, juggling the demands of Operational Missions and Training.

Through the years in Squadron, an RSAF Pilot will be upgraded from a non-operational pilot (CAT D) to an operationally ready pilot (CAT A). Once attaining CAT A status, depending on various factors such as the aptitude of the pilot and organisational requirements, the RSAF CAT A Pilot could be given an opportunity for an Instructional Tour or a Staff Tour.

Upon graduation from Instructor training, the RSAF Pilot could be posted to training Squadrons overseas (like 130 SQN in Perth), or they could serve their instructional tour in an Operational Squadron in Singapore.

Once again, depending on organisational requirements and the aptitude of the RSAF Pilot, a Flying Instructor could be given an opportunity to serve his Staff Tour after a few years as an Instructor.

During a Staff Tour, the Pilot could either be posted to a department in the Ministry of Defence or the HQ of an RSAF Command. To excel as a Staff Officer, the RSAF Pilot is expected to be able to conceptualise and implement various concepts and theories. A good Staff Officer could expect to have an influence on the development of the RSAF.

Because flying is considered a perishable skill, Staff Officers are required to maintain their flying skills by flying regularly with their assigned squadrons. Staff Officers generally fly about 1 to 2 times a month and are expected to juggle their work in the office and their flying obligations.

After rising through the ranks as an Instructor or as a Staff Officer, the RSAF Pilot would be posted back into a Training Squadron or Operational Squadron as an Officer Commanding (OC). The OC of a Squadron reports to the Commanding Officer of the Squadron and can be considered as the General Manager of the Squadron. The OC is entrusted to ensure the smooth running of daily operations, and they are also expected to nurture and develop the career of the RSAF Pilots and RSAF Specialists that are under their command.

After a few years as an OC, the RSAF Pilot would be sent to Command and Staff College.

CSC training takes about 1 year. Upon graduation, the RSAF Pilot could either become a Commanding Officer of a Flying Squadron or become a Branch Head in a MINDEF Department or Command HQ.

The rest of the RSAF Pilot’s Career will be spent in a leadership role, whether it is as a Staff Officer in HQ or MINDEF, or as a CO in an operational Squadron. At this point of time, the career for the RSAF Pilot can be very fluid, and it is not unusual for the pilot to spend some time as a Branch Head before becoming a Commanding Officer or as a Commanding Officer in between two stints as a Branch Head, depending on organisation requirements.

Good performing Branch Heads or COs will be promoted to become the Commander of a Command or take up a road as a Department Head in MINDEF. These positions are usually given to Military Scholars, but a few “farmers” have been known to rise up through the ranks to take up a place in such roles.

The retirement age for an RSAF Pilot is 45 years old. The RSAF Pilot might still be young, but a financially savvy RSAF Pilot should be financially free at 45, and open to pursuing anything he or she desires.